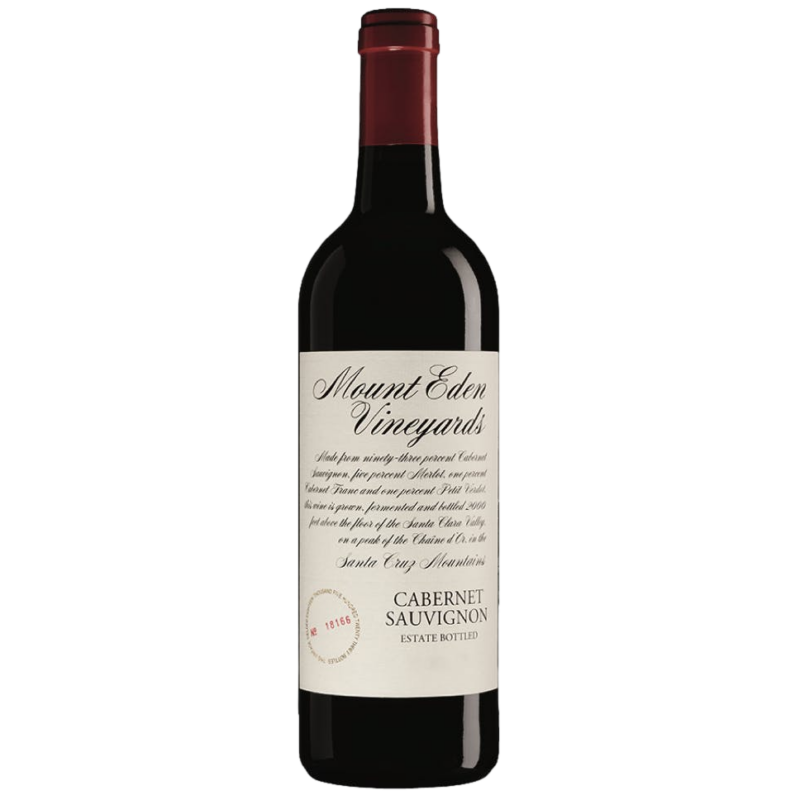 (price per 750ml bottle) - sold in cases of 6 bottles
Temporarily low in stock or limited availability. Please add to your cart and proceed to checkout. Your order will be submitted as an order request. Our team will follow up with availability details. No payment is required.

The Santa Cruz Mountains AVA holds a special distinction: It is home to the only two estate-bottled mountain-grown Cabernets that are truly influenced by the Pacific Ocean. Both have been at it awhile. The first is Ridge Monte Bello (1962), the second is Mount Eden Estate. In 1945, legendary vintner Martin Ray began to develop Mount Eden’s estate vineyard on a rugged mountaintop in the Santa Cruz Mountains. Today, the site consists of 40 acres of low-yielding vines. Planted in infertile Franciscan shale, the vineyards are 25 kilometres from the Pacific Ocean, and enjoy a cool yet sunny climate above the fog line. The growing season there is long, and naturally low yields, along with slow, steady maturation, result in incredibly intense fruit.

If you appreciate the qualities that result in Bordeaux varietals grown on the edge – namely, low alcohols, earth-driven flavours, and unique terroir – Cabernet from the Santa Cruz Mountains are prime examples. These are lower alcohol wines with full flavours that evolve beautifully with time.

Estate-grown Cabernet Sauvignon is a Bordeaux-style blend of approximately 75% Cabernet, 22% Merlot and 3% Cabernet Franc. Fruit is macerated in small open-top stainless steel tanks, and then fermented by naturally occurring yeast. The young wine was aged in new French oak for nearly two years before it was bottled, unfiltered and unfined, and aged another two years prior to release. It has a long life ahead. The winery prides itself in an “Old World” style, and note that this is the most compelling vin de garde they’ve produced in the last three decades.

There is a notable depth of flavour, texture, vibrancy, and richness. The nose is all nuanced black currant, graphite, and mountain flowers. Fine integrated tannins buttress characteristic flavours of red currant, blackberry and earth. Recommended cellaring is ten to fifteen years, after which you will be rewarded with a complex and vibrant California Cabernet that shines among wines that cost over twice the price!

“The 2017 Cabernet Sauvignon is fabulous. A rush of floral and spice notes leads into a core of racy purplish fruit. Lavender, sage, mint and a whole range of savory Cabernet aromatics play off the natural richness of the year so well. The 2017 is a blend of Cabernet Sauvignon from Domaine Eden plus non-estate vineyards in Los Gatos and Saratoga, along with Merlot and Cabernet Franc from Mount Eden. That blend works so well. I loved it for its power and density. More importantly, the 2017 is a huge overachiever and a screaming value. 2022-2032.”
94 points, Antonio Galloni, Vinous Media, September 2020